Installment 5: How to Advance Racial & Economic Justice with Municipal Bonds 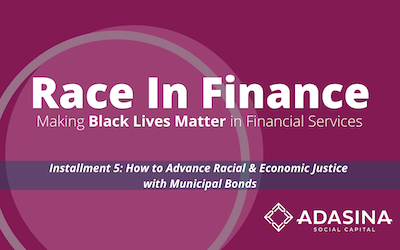 This article is part five of a series about race and racism in financial services. The full series can be read here.

Racial discrimination and violent policing are negative externalities (investment costs) not typically considered in municipal bond (muni) ratings. For our investment choices to support strong Black communities, and as financial fiduciaries, we must review this vital risk assessment data. Since credit ratings agencies don’t typically look closely at the data that point to racial and economic justice in a municipality, how can we access this critical decision-making information?

Rachel: Before we talk about your process, tell me a little bit about what led you to do this work.

Ryan: After the 2014 police killing of Michael Brown, and the resulting civil unrest in Ferguson, Missouri, Napoleon Wallace (Activest’s co-founder) and I saw a glaring connection between systemic racism and municipal financing. We realized then that the same policies that led to civil unrest in Ferguson – rampant police brutality and excessive fines and fees on residents – also eventually led to a major downgrade of their municipal bond ratings, but only after significant civil unrest had emerged. We realized that at the intersection of these issues was a pressing need for fiscal justice – an equitable representation of who has influence on, and benefits from, public funds, spending, and revenue1.

Digging deeper, we began to see even more connections between municipal finance and racial justice. For instance, in municipalities with fiscal justice deficiencies, police brutality is a common occurrence and it’s getting worse.2 From 2013-2019 we’ve seen a steady increase in the violence of police interactions3, which disproportionately impacts Black people4 and negatively affects municipalities in a number of ways. Serial police brutality is very expensive for a municipality and can result in multi-million dollar settlements with victims’ families5, which can divert critical municipal funds from civic investments in education, housing, community health, and other long-term, positive community outcomes.

At the same time, we’ve witnessed a trend in the past 40 years of some municipalities prioritizing the desires of property owners over the needs of the residents. Property owners often want reduced taxes. So the financial burden is moved over to the individual residents through increased sales taxes, and excessive fines and fees6, and this dynamic is often most acute in predominantly Black and Brown communities7. We can see this tension in recent videos of civil unrest where residents are marching for their right to live, while police officers, representing the municipality, are out protecting property.

In many municipalities, police are also responsible for collecting fines and fees from residents which may place additional pressure on already strained relationships between residents and police. As stated by Justice Ruth Bader Ginsberg in the 2018 Supreme Court Case Timbs vs Indiana, excessive fines and fees create perverse incentives for police, often leading officers to seek fault where there may be none.8 So, when there is reliance on excessive fines and fees to fund the city, and that is paired with rampant police brutality, we find this combination both financially unsustainable (a potential risk for bondholders) and detrimental to the Black communities within these municipalities.

As this intersection of race, justice, and municipal finance became more clear, we realized that many municipalities carried unidentified financial and social risks, but ratings agencies didn’t appear to be considering these data points.

Rachel: Let’s back up for a second – you are not an investing organization, but you work in the municipal bonds space. How does Activest fit into the investment world?

Ryan: Given the issues I’ve outlined, we believe that communities that treat their residents fairly realize better fiscal outcomes. Our research approach blends economic modeling, financial analysis, and social policy research to advance racial justice in municipal finance. We have better tools for analysis because we have a different motivation than mainstream credit ratings companies. We think that listening to the community on the ground in these municipalities, plus a deep review of social policies and financial data, gives us a better view into relevant social and financial risks in these municipalities. We believe this data can be used both to help investors make informed investment decisions and also to act more effectively for racial and economic justice where they are bondholders in Black communities. Investors are hungry for this kind of data, especially now. So, we’ve partnered with Adasina to apply our research, insights, and advocacy to real-world municipal bond portfolios.

Rachel: What you’re describing sounds like the fundamentals of investing. Why aren’t muni ratings agencies doing this kind of research?

Ryan: We wish they were! I suspect there are two reasons this isn’t happening.

First, muni ratings analysts aren’t trained to analyze the financial effects of a municipality’s criminal justice policies, nor its public health or economic development issues. In fact, this summer was the first time we’ve heard the rating agencies even mention race or social unrest as a factor in local government credit ratings.9 In addition to lacking that framework for understanding, most analysts are not equipped with the data they need to understand the complexities of these factors. The data we are looking at is not easy to compile. In conversations we’ve had with ratings agencies, they tell us their data does not show excessive revenue from fines and fees. Our research at Activest requires data not available in a typical investment database, which means days of searching through PDFs, talking to community organizers, and looking up public records.

The second issue, which is harder to quantify, is systemic racism. The voices of Black and Brown individuals and communities are often discounted in the business world, so ratings agencies may not be putting enough emphasis on what is happening to the citizens of municipalities with large Black and Brown populations. So, the kinds of indicators we look for, like excessive fines and fees, aren’t necessarily being considered by ratings agencies.

Rachel: Tell me a little more about the risks that come from excessive fees on residents. To the untrained eye, fees on residents might seem simply like standard practice for a municipality.

Ryan: A municipality needs to have functional revenue streams to be able to provide infrastructure and services to its residents.10 However, relying on fines and fees, which we call “taxation by citation11,” is fiscally unsustainable primarily because budgeting for them is illegal. Municipalities are constitutionally restricted from budgeting for fines and fees based on the 14th Amendment.12 As a result, tacitly relying on them to fund a municipality prevents good fiscal budgeting and planning. Additionally, collection is expensive and the delinquency rate for fines and fees is high, which can make the cost of collecting the revenue nearly as high as the prospective revenue itself – and that’s on top of the high social and financial cost of paying police to be the primary collectors and enforcers.

All of this means the municipalities are using what’s intended to be an infrequent law enforcement tool into a regular revenue source. Also, in our research, we find that those regressive fees tend to be disproportionately levied upon poorer residents because of additional compounding penalties for late or non-payment. Instead of serving residents, the fines and fees actually decrease trust between residents and governments and increase poverty. If bond analysts saw a similar pattern in a sovereign debt issuance, we would flag it as a risk because of the potential for social instability, but we don’t typically apply that lens to the domestic muni market.

Rachel: We’ve talked about some of the unjust and fiscally unsustainable practices you uncover in your research. Tell me about the positive indicators that signal opportunities to invest in Black communities and prioritize fiscal justice.

Ryan: We seek out municipalities that have economic opportunities for Black residents and are focused on creating positive change at a systemic level. Our hope is by deploying capital to cities that might have typically underrated municipal bonds due to a large population of Black residents13, we can direct critical capital to those underserved communities that are otherwise viable investment opportunities. We then research whether those municipalities are prepared to handle and deploy capital in a sustainable and fiscally responsible manner. What that ends up looking like is primarily choosing to proactively invest in general obligation municipal bonds in Black communities, but may also include school bonds, Historically Black Colleges & Universities (HBCU) bonds, CDFI notes, SBA debentures, and sustainable energy notes.

Rachel: Thank you, Ryan, for taking the time to share more about your work with me today.

Rachel here. Now I want to share how we at Adasina use the research and data we get from partnering with Activest to create fixed income portfolios that support racial justice.

Our strategy aims to advance racial and economic justice by making much-needed capital available to fiscally sound and under-resourced Black communities, while also providing transformational capital to Black communities with significant fiscal justice opportunities. We use the data from Activest to refine our investable universe and identify opportunities for strategic bondholder engagement. For more detailed information you can look at the overview of our Fiscal Justice Investment Strategy or the investment case.

At Adasina, we always seek to understand the impact of our investments by talking to the communities most impacted. Our partnership with Activest allows us to hear what municipal issues are affecting residents, and how we can best channel our dollars and investor organizing to advance racial and economic justice. Understanding the needs of a community is a nuanced and continuously evolving work, we are grateful that Activest can be our eyes and ears attuned to racial justice inside of municipalities.

For investment firms that want to incorporate this type of racial justice lens, you can partner with me and the team at Adasina for separately managed accounts over $1 million. And, yes, we hear you financial advisors and clients with less than $1 million dollars. We are actively looking for ways to make this strategy more accessible to everyone in the future.

To read future installments of this series, sign up for our newsletter or follow #RaceInFinance conversation on social media.

You can also watch a video recording of a recent virtual event on our Fiscal Justice Investment Strategy here.